"My temporary teeth are annoying and have been the whole time..."

Becky, Vicky's daughter, has worked in the dental field for over a decade, and has been helping her mom through this entire process. She said:

"So she's had-- I can't tell you how many root canals, which always end up in extractions. She spent lots of money on it before, so she wanted to have something permanent and just get her smile back."

Six years ago, Vicky tried to get dental implants. But before she could, her husband tragically passed away. She had given up on the possibility of a beautiful, functional smile until she heard about Nuvia's permanent teeth and 24-hours.

One of Nuvia's Surgeons, Dr. Haroon, met with Vicky, and here is her take on the possible issues with the surgery: 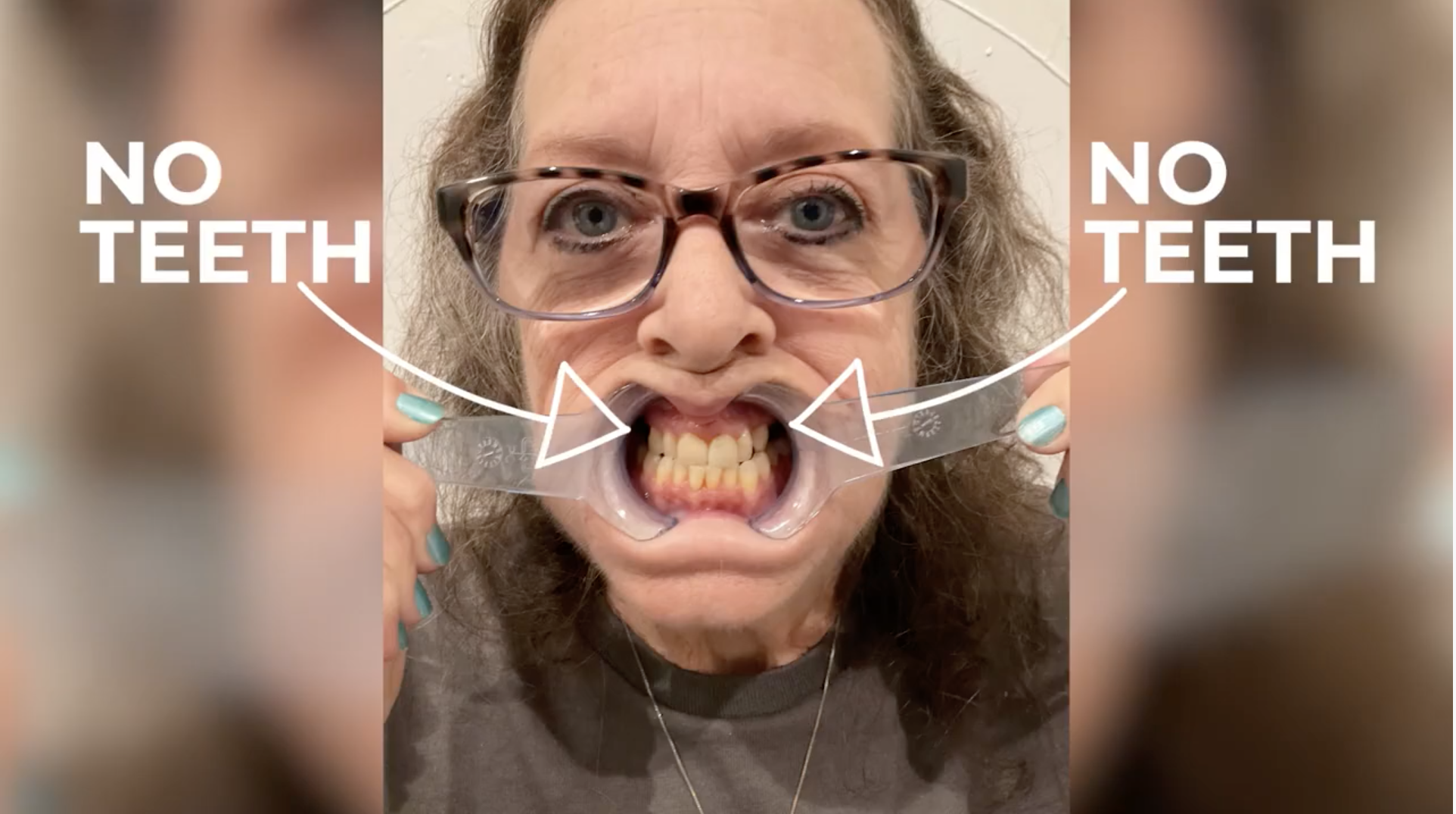 What partial dentures do is that they cause more bone loss in the area. And it also feels as if you are biting on plates rather than biting on individual teeth.

She also complained about having some sinus trouble and some breathing problems because of some of the teeth that she had, and there were some abscesses on the apices off her teeth. So some of the problems that can arise from not having your back teeth is, first of all, it affects your quality of life because you can't really chew and grind down your food and swallow it properly. Secondly, it also causes flaring off your teeth in the front because now all the pressure and the forces are on the teeth in the front.

So what we proposed for Vicky was to remove all her front teeth, clean out all those abscesses and the infections, and place four to five implants depending on how much bone and space we had in the area, and then deliver a fixed prosthesis which is also known as our 24-hour smile. So an all-in-four or an all-on-x procedure involves removing all the teeth and then reducing some bone to allow the prosthesis to fit.

All of these measurements are taken before we go into surgery based on the patient's smile line. Everything is digitally designed. And then we go in, look into the scan, and depending on how much bone we have available, we place anywhere from four to six implants to provide a fixed prosthesis and stability for that prosthesis.

In her case, we're planning to angle the implants to avoid the sinuses and place four implants, which will provide enough stability to give her a fixed prosthesis." 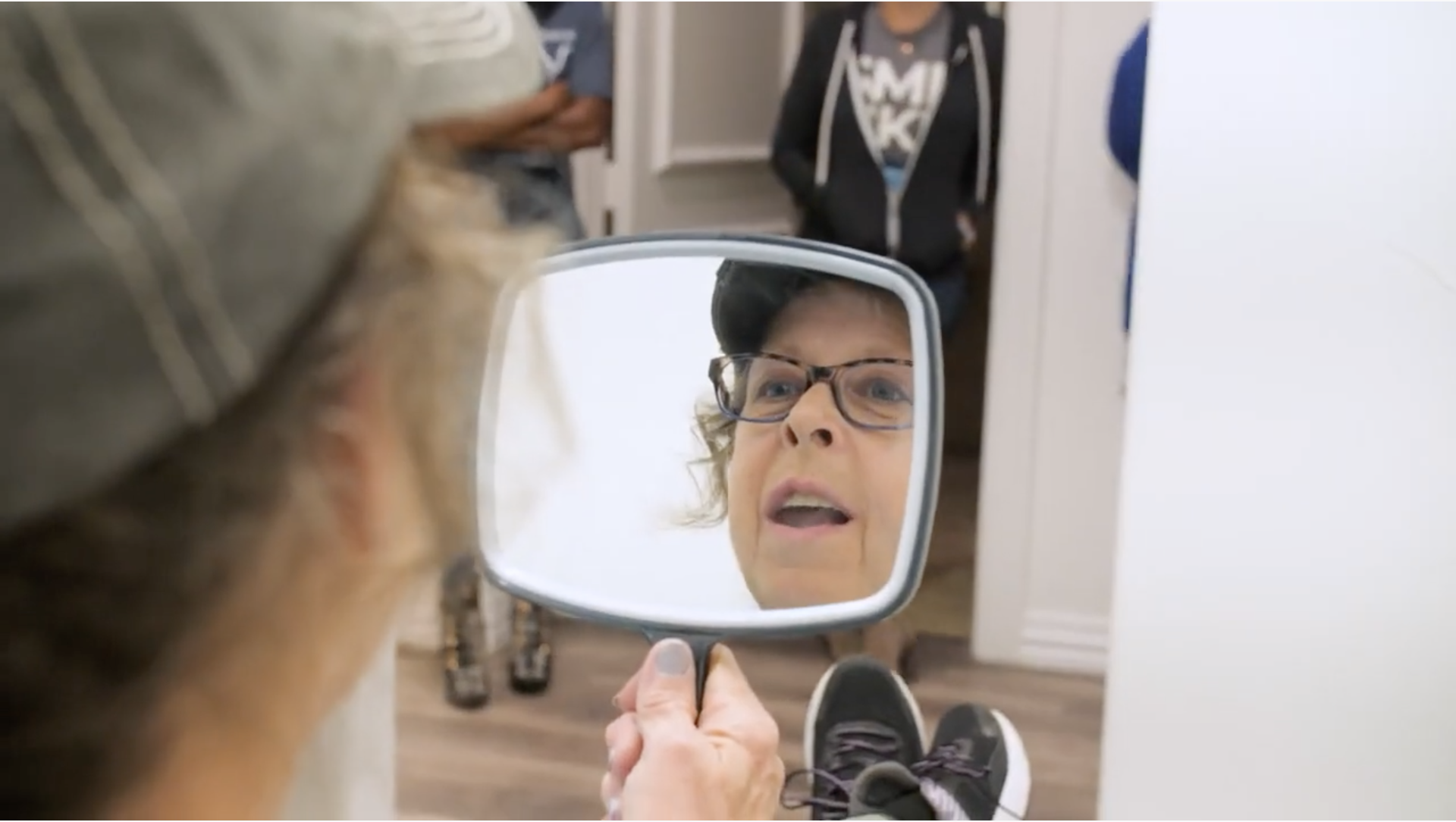 This was Dr. Haroon's take after the surgery:

"So we're done with Vicky's surgery, and here's what we did for her. We were able to place four implants for her. The implants in the back are angelated to avoid the sinuses. Now, every case does not look like this just because everybody has different anatomy, and the implants have to be placed based on every individual's physiology and the way their bone is.

Another thing that we did for Vicky is that she had some teeth in the front part of her mouth, where there were some infections going on around the apices of her teeth. And what that was causing it was that it was blocking her nasal passage. After we removed those teeth, we cleaned out the abscess and everything. It opened up her airway, and she expressed how she can breathe much better. So a lot of times, these procedures and then you remove the offending tooth, it can help clear the sinuses and the nasal passage in the area.

She goes on to state:

" One of the best parts about my job is the emotional connection and the relationships that we can build with our patients. When Vicky came in for her two-week post-op, she expressed how happy she was with her prosthesis, with her smile, and more so how well she could breathe after the surgery. And this is the feedback that really makes our day worth it. So I thank you all for putting that faith and trust in us." 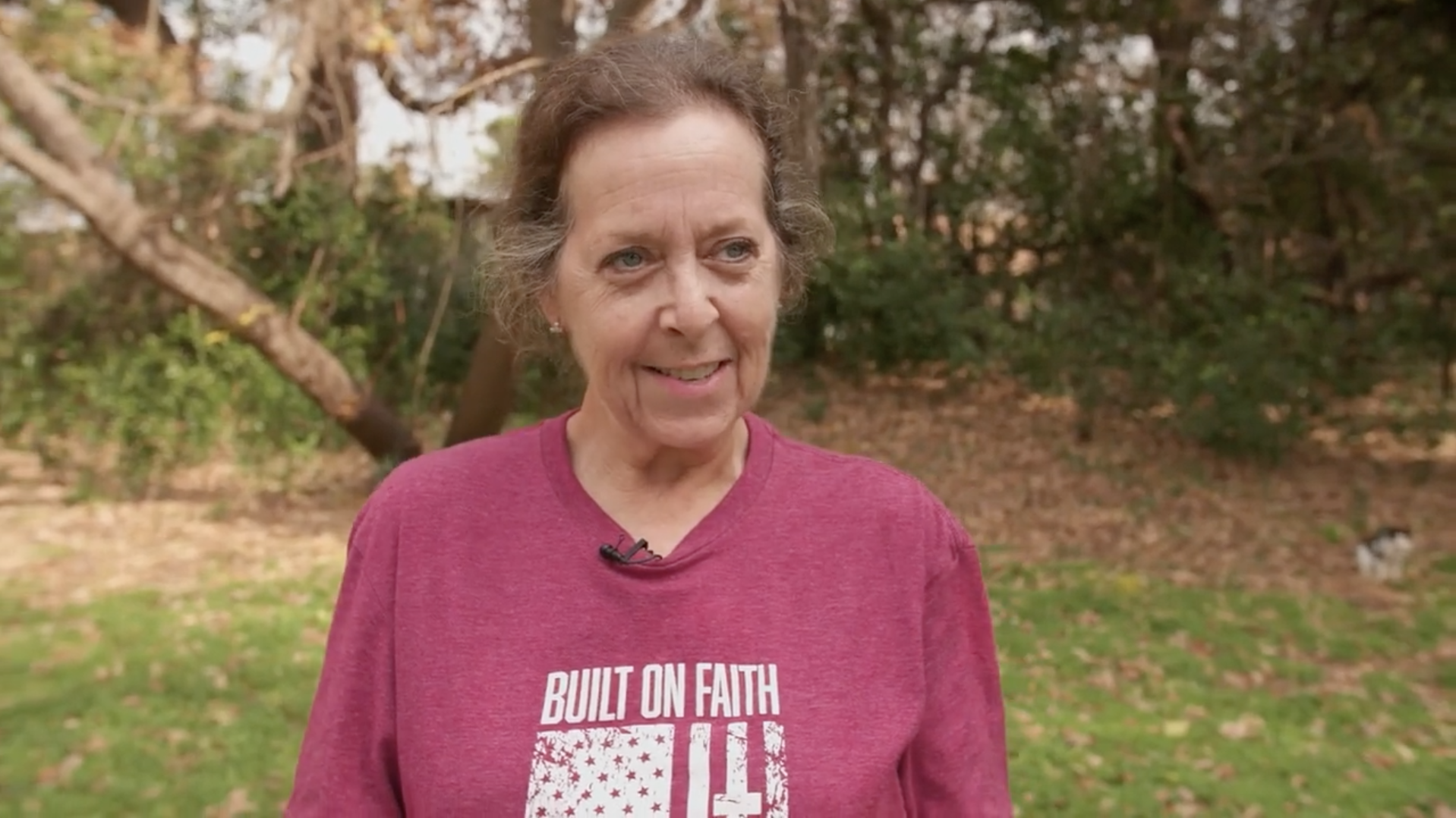 What does Vicky and Becky have to say about her new smile?

Vicky Says, "What I love most about my teeth is everything. Mostly, they're permanent. And I don't have that pain from my teeth anymore.

I smile now. I smile now. I wouldn't even smile before. I like showing my teeth. I mean, I notice, that sounds kind of egotistical, but I love it. And I'm perfectly happy."

Becky says that at Nuvia, "You're treated like a person, not a number. It's not mechanical, the bedside manner is amazing. You just-- my mom absolutely loves it here...

After everything that she's been through and to see her smile again, it's priceless. It's absolutely priceless."

Salt Lake City, UT      Englewood Village, CO      Dallas, TX      Houston, TX      Fort Worth, TX      San Antonio, TX      Phoenix, AZ      Atlanta, GA      Las Vegas, NV      Austin, TX
Nuvia Dental Implant Centers are locally owned and operated by licensed dental practitioners. These locally owned and operated practices are part of a professional network of dental implant centers operated by prosthodontists, oral surgeons, and restorative dentists. Each Nuvia Dental Implant Center has a business affiliation with Nuvia MSO, LLC, a Dental Support Organization that provides non-clinical support to each center. Nuvia Dental Implant Centers are able to provide most dental implant patients with a bridge considered to be permanent in 24-hours. No temporary denture. Not all those who come in for a consultation are medically cleared to receive permanent teeth in 24-hours. Follow up appointments are required to confirm implant integration and make adjustments if necessary. Results may vary in individual cases. All patients represented in videos are actual NUVIA patient(s) and may have been compensated for their time in telling their story.

*While soft foods immediately after surgery are generally approved by our clinical team, the local surgeon may give individual instruction on dental implant aftercare according to the specific circumstances applicable to each case.
‍
*To hear patient's speech  after prosthetic placement please search Nuvia dental implant center on YouTube and watch patient stories. Individual results may vary
‍
Copyright 2022. Nuvia Dental Implant Centers. All rights reserved.
Social Media ProfilesNewsletterCareersAccessibility StatementPress ReleasesBlog
* Individual results may vary based on a number of factors.